K I N E T I C is the second in a series of print publications exploring the relationship between type, text, and form. We’d like to thank everyone involved in this anthology, from poets to designers to our editorial team. Selected pieces have been interpreted as dance pieces, available in the book via QR code or online by dancer Hannah Spencer, accessible via QR code. 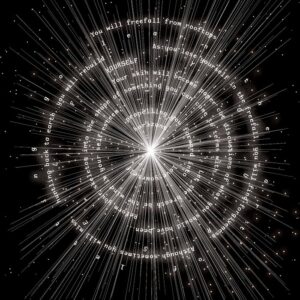 Angharad Hengyu Owen is a graphic designer exploring visual narratives through type, engaging in visual communication as literary practice; a way of transmitting, interpreting and understanding ideas. She has solo and team experience in a range of print and digital projects across cultural, social and corporate sectors. 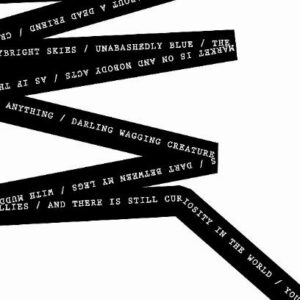 Manita Songserm is a Bangkok-based graphic designer and a member of AGI (Alliance Graphique Internationale) inducted in 2019 whose interests alight on the communication between art and graphic design. Since 2013 she has been working with Bangkok Art and Culture Centre (BACC) on an exhibition, combining the inspiration of experimental mediums with her body of work – to make a collection of art across multiple shades. Her iconic work is can be seen through typo-eccentric book design and through personal art for Typewriter project. 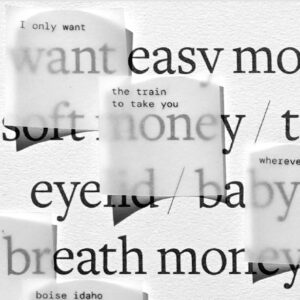 Molly Haig is a graphic designer and artist based in Berlin. Her work combines analog and digital processes to explore layers, language, and systems. Molly holds a BA in psychology from Yale and an MFA in graphic design from Boston University. 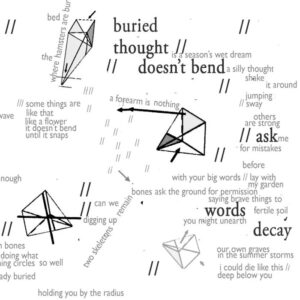 Rosaire Appel was born in New York City and grew up in semi-rural environments. But the city had her heart and at twenty, she returned. For decades she alternated between verbal and visual interests: writing poetry and then fiction – painting and then darkroom photography took over. Finally her visual and verbal interests merged. Her love of languages transmuted to mark-making via abstract calligraphy or asemic writing which she uses now to investigate aspects of this world we live in. She draws and creates visual books, both one of a kind and commercially printed ones that are available on line. 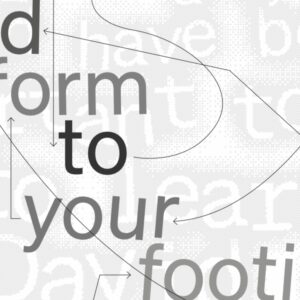 Pedro Neves is a designer from Portugal, currently a visiting professor at the University of Illinois at Chicago. His creative work focus on the use of code with language and typography. Pedro’s approach explores the potential of digital and logical creative processes, when applied to traditional typesetting and graphic design methodologies. 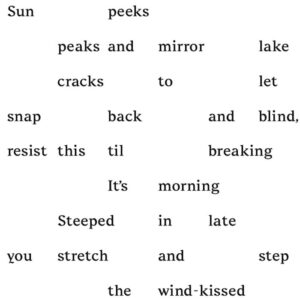 Pouya Ahmadi is a designer, artist, and educator. Educated in Iran and Switzerland and currently Assistant Professor of Graphic Design at the UIC School of Design, Ahmadi operates an international professional practice that focuses on identities, printed matter, and publications for cultural institutions and nonprofit organizations; at the same time, he leads an independent practice that explores alternatives to modernism in design, in particular its critical histories and contemporary prospects for more equitable futures. 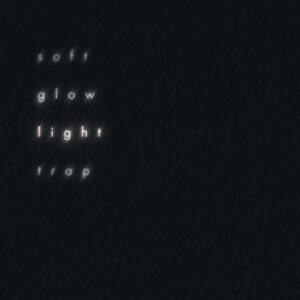 Ting-An Ho is a graphic designer and art director based in Taiwan. As a designer, he enjoys being involved in a variety of design practices, and has been recommended as one of the most influential graphic and motion designers in Asia. Now living in Taipei, he spends most of his time dealing with cats. 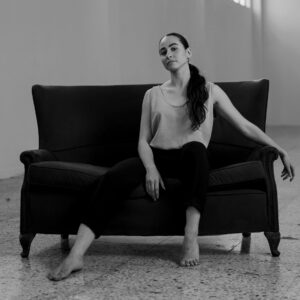 Adina Dumitrasu is a dance artist from Romania. She graduated from the BA Dance Programme ar Unoversity of Surrey in 2021, and is co-Artistic Director of Actual Size Dance Company. 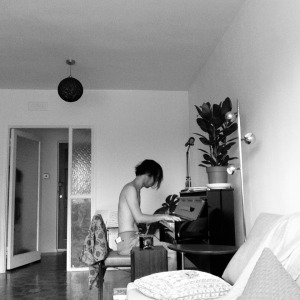 Derek Yau is a multi-instrumentalist-composer, a serial collaborator with a penchant for free and tonal improvisation. A former jazz guitarist evolving to contemporary cellist and with roots in classical piano, he has lent his dynamism to a number of projects, notably on the London folk and experimental scenes which include: Subzar, Clorinde and HART. Derek is a long-standing Colliding Lines member and collaborator across many multi-disciplinary projects. 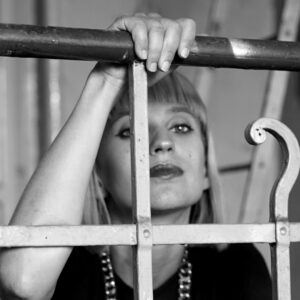 Theresa Elflein aka Elfyn is a German-born composer, vocalist, producer and sound artist currently based in Leipzig, after spending her formative years in London, Brighton and Cambridge. As a member of art pop project MAW, she has released numerous self-produced recordings and toured across Europe. Theresa is one third of poetry and sound art project Catching Shadows. 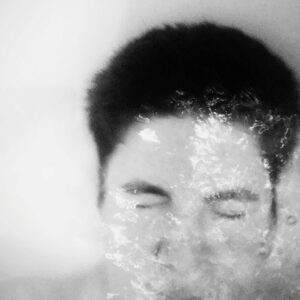 Bibi June is a poet and performance maker who writes about queerness, climate justice and post-apocalyptic hope. Their second pamphlet ‘Critique of the Criminal Justice System’ was nominated for the Callum Macdonald Memorial Award, and their latest pamphlet ‘Kinsey Scale for the Emotionally Fragile Queer’ is being published by Burning Eye in May 2022. They write for award-winning queer horror podcast ‘Folxlore’. 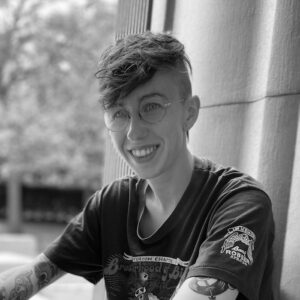 Cleo Henry (they/them) is a writer and researcher based in London. They are particularly interested in queerness, archives and the apocalypse. Their first pamphlet, The Last Lesbian Bar in the Midlands, is upcoming from Fourteen Poems. 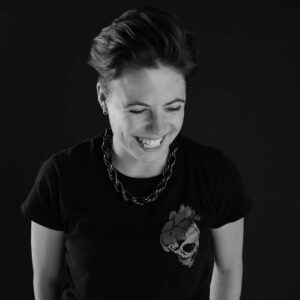 Daisy Thurston-Gent is a writer and producer from Cambridge. She is a founding member of London Queer Writers, a creative network curating regular live poetry events and monthly writing workshops for the LGBTQ+ community. She is one half of Radio Xaddy, a brave little podcast about Queer history and lifestyle. 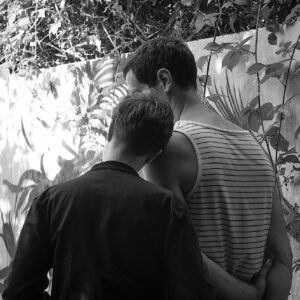 David Turner is a joiner from south London who wastes most of his time recording odd noises and making ‘books’ as one half of YOU DON’T KNOW; and if you don’t want to hear/read about class consciousness and/or mental health services then to be honest you probably don’t want to know.

Lizzy Turner is a poet and artist based in Walthamstow. She is one half of collaborative print/podcast project YOU DON’T KNOW – David Turner is the other half. Lizzy likes text, handwriting, sound, collage and combinations of all those things. 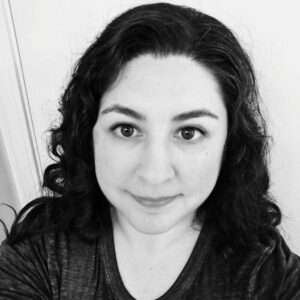 Lauren Scharhag (she/her) is an associate editor for GLEAM: Journal of the Cadralor, and the author of thirteen books, including ‘Requiem for a Robot Dog’ (Cajun Mutt Press) and ‘Languages, First and Last’ (Cyberwit Press). She has had over 200 publications in literary venues around the world. Recent honors include finalist for the Stephen A. DiBiase Poetry Contest and the Seamus Burns Creative Writing Prize. Her work has also received multiple Best of the Net, Pushcart Prize, and Rhysling Award nominations. She lives in Kansas City, MO. 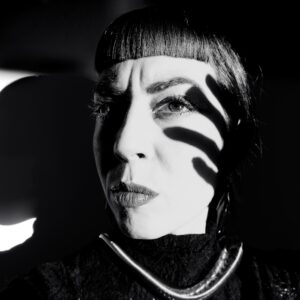 Lola de la Mata (b.1991) is a London born French/Spanish conceptual sound artist, composer, curator and musician (violin/voice/electronics) currently based between Liverpool and London. Their work sits across performance art, installation and sculptural composition developed in collaboration with other musicians, dancers and queer performance artists. Lola’s current research and artistic practice centres around translation, experiences of chronic illness, and AI personal assistants’ use of a ‘neutral’ female voice. 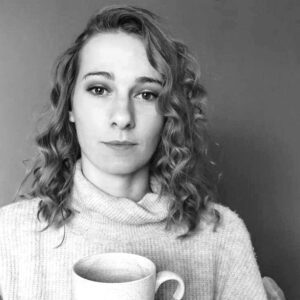 Nikki Marrone is a spoken word performer, published poet, photographer, and coffee addict. She is motivated through feelings, of which she has plenty. Nikki is the winner of multiple poetry slams and has featured at various spoken word nights and festivals internationally but is based in the UK. Author of ‘Lost & Found: A Poetry Passport’, ‘Psychogenic Fugue’ and ‘Honey & Lemon’. She splits her time between motherhood, being creative, adventuring and doing her MA in childhood & youth. 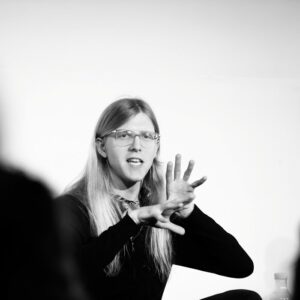 Robin Lamboll is a physicist researching climate change, and writes on the intersection between the natural and the human. Robin has won the UK, Vogon and Madrid International poetry slam finals, and came second in the World Cup of Slam in 2019. 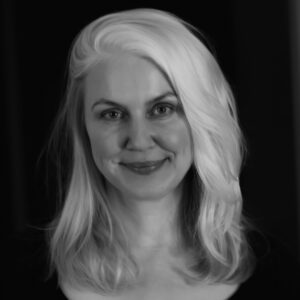 Tina Lesnik is 37 years old and lives in Berlin. Today, she works as a pedagogue. Tina is impressed by the sound of words and the power they can have. Sometimes her texts are created through her photographs, and sometimes it’s the other way round. It is a balance to everyday life. 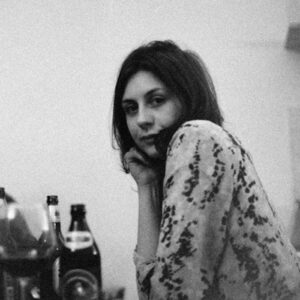 Veronique Homann is a writer and artist originally from Austria, now based in Berlin, Germany. Her work is dedicated to detecting gaps and finding methods to fill them. 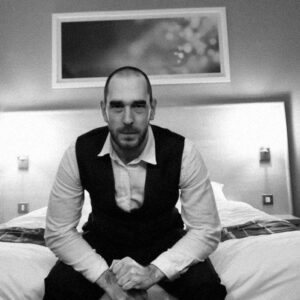 Wesley Freeman-Smith is an event producer and live arts facilitator, and founder of Colliding Lines. His other projects include Catching Shadows, a spoken word and sound art band. He enjoys putting text and text-based things where they shouldn’t be. He lives in the Cambridge, UK.

Special thanks to Joe from Cambridge Print Solutions, who provided excellent advice and tolerated our princess tendencies when bringing this book into print.