‘Nightscapes’, performed by Laura McGarrigle, Tom Adams and dancer Blanche Laviale, was built from looped vocals, piano and improvised dance. The trio are accompanied by a third player in the form of a beautiful, unsettling abstract film edited by Wesley Freeman-Smith. The surreal triad of dance, music and film leads audiences through landscapes that aren’t landscapes; songs that aren’t songs.

‘Word of Mouth’ was an interactive rock show by spectral art-pop group Mouth – this evening composed of Theresa Elflein, Andy Fraser and Henri Salonen. Prior to the performance, audience members were invited to submit instruction to the band – “play in reverse”, “make it wobble”, “slow and lazy” being several examples. These were shuffled independent of the band, who had to respond in real time to the instructions as they appeared behind them. 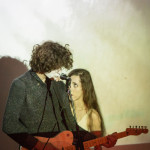 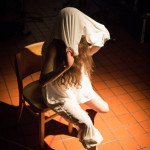 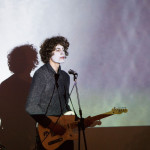 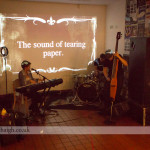 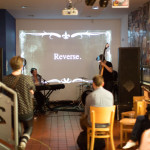 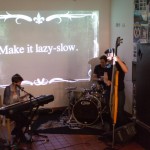