Time Now For Ghosts is a minimalist performance & sound piece in three movements, written for one dancer and one musician. It is site-specific, utilizing the audience’s interaction with the space to form generative audio loops played back in real time. The environment this creates forms the stage upon which the performance plays out; the performance is bone-white, stark and spotlit in the darkness.

Inspired by the female form and the recurrence of trinities throughout literature and religion, the show is underpinned by research but not limited by it. Performers work by instinct and improvisation, responding to the underlying themes and to each other equally.

A series of dance performances are minimally lit, their stories soundtracked by piano. It is a celebration of the human form, casting a female dancer who throughout three movements reflects the recurrence of trinities throughout various mythologies, mapping a narrative from conception through life to death. The beginning, middle and end are all different facets of the whole.

Many pantheons and tropes throughout symbolism and myth cast a three-in-one goddess as the representation of fate, their aspects corresponding to variations upon past, present and future. In Greek myth the Moirai Clotho, Lachesis and Atropos spun the thread of life, measured and cut it, while their Roman counterparts similarly play the roles of spinner, weaver & cutter. In Norse, Norns represent destiny as it flows through time, the specific aspects of the three coming later as a Greco-Roman influence. In all instances these deities are female, associated with the moon, magic and the underworld, and they are often portrayed as more ancient than other gods.

Echoes can be seen in Macbeth’s three witches, and in various works William Blake adopted the triple goddess Hecate as the Queen of Ghosts:

“The Gods all Serve her at her will; so great her Power is, like fabled Hecate, she doth bind them to her law.”

The performance’s name is a reference to this but is taken from a chapter in Haruki Murakami’s novel 1Q84. The moon features heavily throughout the novel, its distortion used as a signifier for a world where the rules of cause and effect no longer apply and natural order is disrupted.

Each of the movements within the performance reflect this theme, the narrative following the three aspects through maiden to mother to crone. It is an archetype that has deep resonance throughout Western culture and symbolism, and while not beholden to it the concept is informed by these ideas. 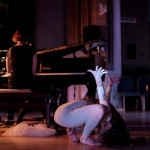 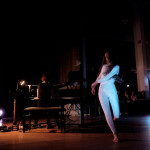 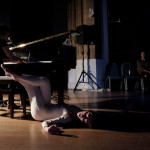 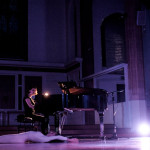 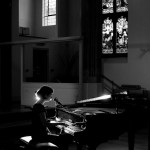 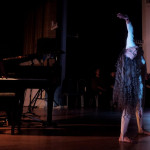 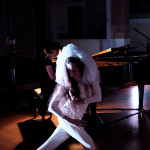 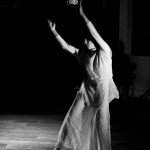